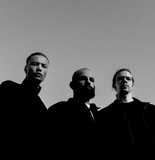 You’d be forgiven for thinking KRANKk is from the UK. Their blend of Grimey basslines, Burial-inspired atmospherics, and future garage beats sound like they’ve been brewed up in a London lock-off. Debut single "Like That" is an instant hit. Nervous clicks and fragmentary synth waves drive to a bouncy apotheosis. Guest rappers