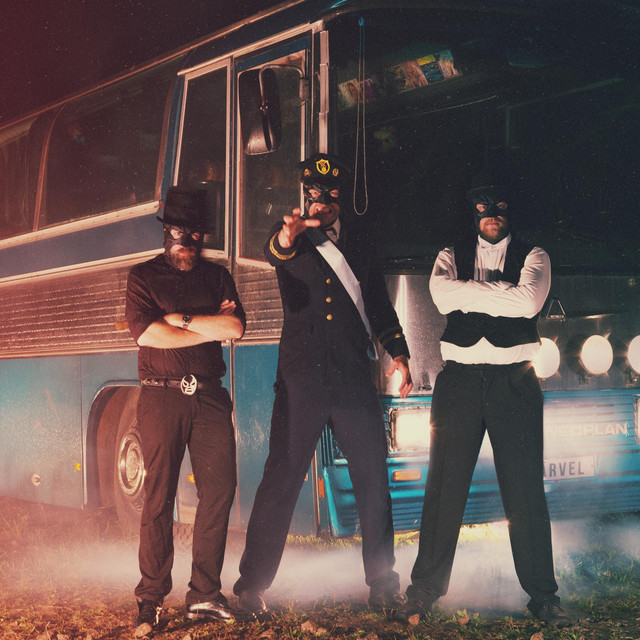 Märvel is a power trio with at least five members. The King (guitars, vocals), The Vicar (drums) and The Burgher (bass), 3rd in a proud line of bass players (Speedo and the Aviator). From gig no 1, the identities of the members have been held secret. Their motives might be obscure but the message is clear – deliver rock to the masses! Until now, the band has released plenty singles and seven albums: Five Smell City, Thunderblood Heart, Unleashed, Warhawks of War (featuring Dregen/Backyard Babies and Robert Dahlqvist/The Hellacopters), Hadal Zone Express, The Hills Have Eyes (produced by Fred Estby) and At the Sunshine Factory. Märvel's explosive live performances have earned the band a loyal Ärmy of fans with official fan clubs all over the world. For their 7th album, ”At the Sunshine Factory”, Märvel built their own studio, Solskensfabriken, where they produced and recorded this first album for their new label, The Sign Records. Their next album - GUILTY PLEASURES - was released in the spring of 2019 and held ten smoking cover songs that had been given a royal Märvel treatment. 6 singles were released in support of the album

to much public praise. In early 2020, Märvel will be back with original material - MARVELLOUS is the the first single from the vinyl and digital EP. Mixed by Robert Pehrsson's Humbucker and recorded and produced by Märvel at the Sunshine Factory. It was Marvellous - now it’s MÄRVELLOUS!