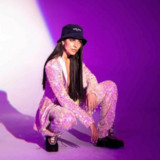 18-year-old Mariana Gonçalves aka April Ivy was born and raised in Portugal. In February 2016, her first

single “Be Ok” as an independent artist, rocked the very ground under our feet, catapulting towards the top of the radio airplay list as well as the Spotify and Itunes charts. As a consequence of all these events, she caught the attention of major music companies, leading April to become the first Portuguese artist to sign a global contract, with Universal Music France. April Ivy composes her own songs and as seen by the feedback given, have been able to achieve a product quality that equalizes that of the best artists in the world. Critically acclaimed by the industry and holding a nomination for MTV Best Portuguese Act, April Ivy is be part of a new generation of talent in the international pop scene.