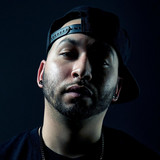 Dbait (Pronounced "Debate") is a Hip-Hop recording artist and producer from Phoenix, Arizona. As a child, Dbait displayed a natural inclination toward music by growing a liking to playing drums, piano, and rapping at the age of 8.   He released his first independent album at age 17 which was written, produced and mixed by him. Shortly after his first independent release, he traveled around a bit opening up for established artists such as FLAME and Wax.   Dbait met The Rep on a flight from Phoenix to New York and was appointed as one of the producers for his highly anticipated album 13th Floor. Dbait produced the tracks "Down To Sleep" and "What If" featuring Eshon Burgundy. Dbait also co-produced the track "Picture On The Wall". The Rep had previously been slotted to be on Proof's label before we all tragically lost him.   After wrapping up production for 13th Floor, Dbait released 3 solo projects: Writer’s Block Mixtape, Hypergraphia and N2O Mixtape. After a brief hiatus from recording, Dbait compiled some of the songs from his previous mixtapes and albums and placed them on a new album titled "The Phantom". He also wrote over 20 entirely new songs for this project.