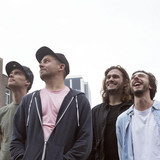 “Such authenticity is hard to come by these days in people, let alone in a full-length album – but that’s what makes Tenderfoot truly shine, helping them rise above the noise. The band lays it all on the line in a poignant, poetic outpouring of emotive music and timeless sentiment.” - 9.3/10 Atwood Magazine, New York    “If this sample is anything to go by, ‘To Be Young’ will be among the best Aussie albums of 2018, so keep your ears open.” - Music Insight    “His falsetto, at times, sits between Bon Iver’s Justin Vernon and the Middle East’s Jordan Ireland—hauntingly beautiful and tense at the same time." - AAA Backstage    After their live show was seen by Audio Network’s global head of music the Australian band were offered the opportunity to record and orchestrate their debut album To Be Young at Abbey Road Studios in London. The process quickly evolved to include UK producer/songwriter Julian Emery. Pairing up over Skype, Emery and frontman John Vella penned what would become the foundation of the record, before the band traveled to Abbey Road to work with the English Session Orchestra and the original upright pianos used by The Beatles. To Be Young was released on June 1, 2018.   “This song is a summer smash waiting to happen, a genuinely catchy and cathartic blaze of cheer.” - ‘She Calls’ review, Atwood Magazine    “On The Balance they’re a hugely endearing prospect… with fine harmonies and melodies that feel like they belong to a veteran act.” - Press Play OK