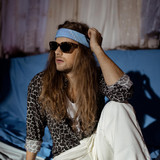 Daniel Levi is an Estonian/American artist, whose music includes sonic layers of soul, funk and R’n’B and armed with a truly lively spirit. Daniel Levi is a household name in Estonia, regularly appearing on national TV and radios and gaining more and more attention internationally along with his dynamic band who are known for their high energy and uplifting performances. Daniel created a huge buzz in the electronic pop scene by collaborating with a local EDM success Cartoon for the hit single “On & On”, that has racked up over 600 million plays on Spotify and YouTube all over the world. Today Daniel Levi has arrived at a timeless pop sound glowing with elements of soul, funk, R’n’B and rock that’s bound together by a strong message and a forceful energy that infects the listener on first impact. "Daniel Levi seems to be able to experiment with many sounds and styles, but it’s actually in their musical injections of soul-R&B-pop good-time energy where they truly shine. Their single ‘Uncle John’, released in March 2020 brings to mind Bruno Mars or The Weeknd, wielding a big personality and sharp presence. That’s where the thrilling energy lies, and this is where they triumph." Europavox