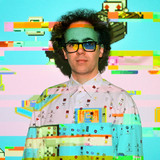 Lincoln Barrett aka High Contrast is an electronic musician, producer, DJ, Grammy nominee and remixer for everyone from White Stripes to Kanye West, Coldplay to Calvin Harris. The Welsh-born bespectacled polymath has been a key player on the drum’n’bass scene for many years but as long ago as 2012 proved himself to be a musician with a wider ambit when he curated music for the Olympic opening ceremony. He is the master of melodic, melancholic jungle: hardcore with a harmonic core. He has been issuing records for nearly two decades, with early 00s d’n’b crossover successes including Racing Green, The Basement Track and Return of Forever and more recent, and increasingly expansive, singles such as Shotgun Mouthwash, The Beat Don’t Feel The Same and Going Up.Notes From The Underground finds Lincoln hermetically ensconced in his Cardiff home studio, using old samplers from the 90s – variously, the Roland W-30 sampler used by the early Prodigy, the Boss SP-303 which was prevalent during 90s hip hop, and classic jungle sampler AKAI S950, which allows you to time-stretch, a key attribute of the genre –

“I’m always ‘sampling’ titles and putting them into new contexts,” he says of past LP titles High Society (2004), Tough Guys Don’t Dance (2007) and The Agony & The Ecstasy (2012). “Jungle is thought of as underground music, so I felt this title was fitting. It’s me going back to my jungle and hardcore roots.”