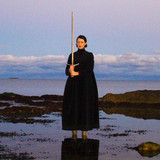 El Perro del Mar is a Swedish artist whose first recordings were confections combining Brill Building pop and the melancholy influences of Brian Wilson and Neil Young. The debut "Look! It's El Perro del Mar!" released in Scandinavia in 2004 was renamed to only "El Perro del Mar" and released internationally in 2005. In 2008, the conceptual album "From The Valley To The Stars", was released. It was followed by an extensive US-tour together with Lykke Li. For her next work she signed up with Rasmus Hägg from the influential duo STUDIO. The album released in 2009, "Love Is Not Pop", drew inspiration from artists like Arthur Russell though still retaining the significant sound of El Perro del Mar. The 2012 album "Pale Fire" expanded on the soundscapes of Love Is Not Pop, pushing the artist further into dark pop waters revealing her teenage icons Cocteau Twins but also referring to contemporary acts such as Gang Gang Dance. The fifth album, "KoKoro"(2016) incorporated Chinese instruments, Arabic strings and sounds inspired by Ethiopian and Indian music. The album was created in close collaboration with producer Jacob Haage and was released on the artist's own label Ging Ging Recordings. In 2018, she released the EP "We Are History" featuring the singles "Fight for Life" and "Mirrors". In late 2020 she released "Free Land". The Grammy-nominated album was a praisal for art and the freedom of art.