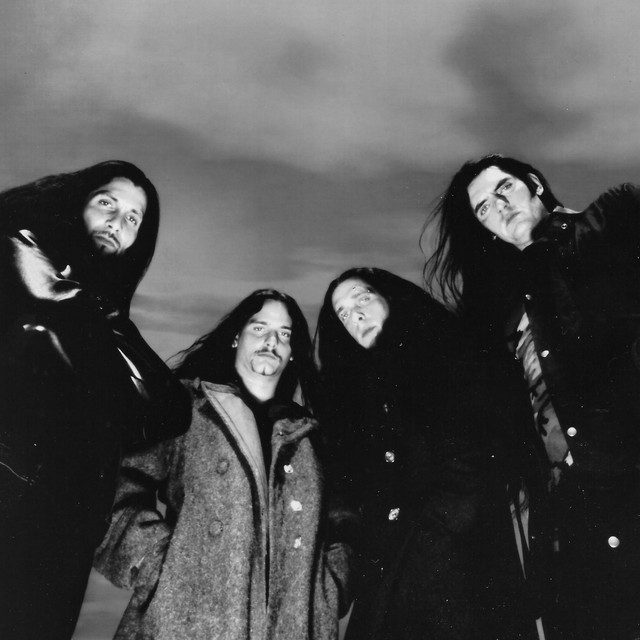 New York goth metal quartet Type O Negative were led by vocalist/bassist/songwriter Peter Steele and featured guitarist Ken Hickey, keyboardist Josh Silver, and drummer Johnny Kelly. Steele formed Type O Negative in 1990 out of the remnants of thrash band Carnivore, along with his friend Sal Abruscato (drums). Type O's music slowed down the tempos of thrash metal, alternately satirizing and wallowing in a glum mixture of misanthropy, misogyny, depression, and vampiric vocals, as well as loads of cheap-sounding guitar distortion. The band's debut album, Slow, Deep and Hard, was released in 1991, featuring long, mopey dirges with titles like "Unsuccessfully Coping with the Natural Beauty of Infidelity." Not everyone appreciated Steele's dark sense of humor, though, and he was roasted by some critics who charged him with being a homicidal misogynist and Nazi sympathizer. A fake live album, The Origin of the Feces, appeared the following year, its notorious cover depicting a pair of spread buttocks (the album was eventually reissued with less graphic artwork). Released in 1993, Bloody Kisses added surprisingly skilled Beatlesque melodies, and Steele's often ironic treatments of his depressing subject matter and the emotional and musical excesses of goth (particularly Type O Negative's brand) were deadly accurate and often very funny. Abruscato departed following its release to join Life of Agony, at which point Kelly joined the band. Bloody Kisses slowly won the band a cult following, thanks in part to the video for "Black No. 1" and the band's constant touring, and the album cracked Billboard's Top 200 well over a year after its release. The more upbeat follow-up, October Rust, appeared in 1996, building on the more pop-oriented tracks of its predecessor; in the meantime, Steele achieved notoriety by appearing as a Playgirl magazine centerfold. World Coming Down finally appeared in 1999 after a three-year hiatus, a considerably darker affair than October Rust but proof that -- in spite of Steele's pronouncements to the contrary -- its predecessors were no fluke. In 2000, Roadrunner compiled The Least Worst of Type O Negative, which featured European single edits and alternate mixes of the band's most popular songs, plus several unreleased tracks. Life Is Killing Me arrived in 2003 with a cover of "Angry Inch" from the film Hedwig and the Angry Inch. Four years passed before the band returned with Dead Again. On April 14, 2010, Steele died from apparent heart failure at the age of 48, which brought Type O Negative to a close as a performing and recording unit. ~ Steve Huey, Rovi