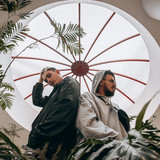 As one of the hottest up and coming projects in the Israeli electronic music scene, Stereotype has made a name for themselves not only domestically but internationally as well.

The project consists of duo Adam and Leon, who have set out to excite the ears of their fans through eclectic rhythms and raw beats few can match.  Both Adam and Leon’s focal point since becoming professionals has been to maintain a world network of collaborations, as they believe the wide variety of cultures they introduce into their music gives their productions a fresh edge in today's consistent dance music world. At the turn of the past decade, Stereotype vision became clear, with quality releases on labels such as Trap Nation’s Lowly, NCS, and QGR. Along with their highly regarded releases the duo has a long-awaited debut album that has been in the works for almost 5 years now. The album, to be released on Lowly, focuses on the broad spectrum of electronic beats that is the collective mind of Stereotype, filled with harmony and exhilaration the album is full of emotion and passion.  Coming a long way from bedroom producers to prodigies, Stereotype has grown a dedicated, loyal fan base. As their true sound continues to solidify itself within the music world, Stereotype will continue to excite. Adam and Leon will always break boundaries while continuing to following their humble vision.