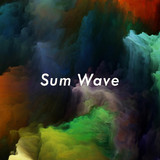 Sum Wave is a self-taught, Swedish musician and producer who, as a child, was heavily influenced by the electronic, club music of artists such as Tiesto and Armin van Buuren. During his teenage years in Gothenburg, Sweden, he began to experiment with midi controllers and production programs such as Propellerhead Software’s “Reason”, quickly discovering a composition style in sync with his early influencers. At 16, many of Sum Wave’s peers started to head in different directions, but he chose to continue focussing on making music, not trouble, subsequently trusting his melodic intuition to pursue a career in production. Since leaving school, he has completed numerous part-time jobs to support his musical career, most recently working as a carpenter. Today, he lives in Gothenburg with his wife and two young children, who he admits are the most honest critics of his music. As a carpenter and a producer, he spends his days building houses and his nights masterminding hit house tracks such as After a While / Smile, which has over 1.5 million plays on Spotify. His music has also struck a chord with the online community and it has now been included in over three million YouTube videos. In 2016, Sum Wave released the multi-track singles

Near Dawn, Sum Clouds and Alpha, following this with Wiggle in 2017.