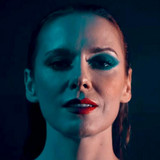 Cinthya Hussey is a Brazilian singer, songwriter, actress & visual artist. A while ago she was given a ukulele as a present and taught herself to play by learning covers. There are videos on her YT channel performing covers of some of her fave artists as well as her first single, a reworking of Morrissey’s ‘Everyday Is Like Sunday’. Produced by Wayne Hussey, singer in The Mission, who has also produced her 2nd single, ‘My Heart Is A Ghost Town’, out on December 11th - a vision of 50s/60s pop, Cocteau Twins, David Lynch - the first song she has written herself, which will be included on her debut solo album out in 2021. Cinthya has recently contributed vocals to remixes of ‘The Delicate Balance Of All Things’ by Beauty In Chaos. ‘Rapid Reiteration Mix’ is remixed by Tim Palmer who’s credits include U2 & Bowie. ‘Equipoise Mix’ by Michael Ciravolo & Michael Rozon. Michael Ciravolo: “When I heard her cover of ‘Everyday Is Like Sunday’ I fell in love with her voice. When we received the track back it was like WOW! She really took the song over & took it to a totally different, beautiful place, somewhere special.” Wayne Hussey: “ Cinthya has a unique and singular vision. It’s rare for new musicians to be so certain of how they want to sound, as she is. Both recordings were totally driven by her, my job being to help her realise the soundscapes she was hearing in her head. Her voice is certainly individual and the way she phrases things is unique.”