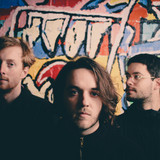 Barely controlled noise and fuzz, the clash and clamour of cymbals; all bordering on outbreak, held together by waves of infectious melody and a commanding restraint, always ready to erupt into chaos. Since bursting through the gates of Australia’s Indie Scene in 2016, with their seminal debut ‘Stay In, Do Nothing’, the defining sound of Adelaide’s Horror My Friend has become as unmistakeable as their dizzying live show. As they grew with the release of breakout single, ‘Turned Loose’, Horror My Friend continue this path with ‘Dopamine Waster’, along with the announcement of a double headline-tour with Melbourne’s Rat!Hammock and their joint single release through James Tidswell’s (Violent Soho) Domestic LaLa (Dear Seattle, West Thebarton, etc.) imprint. Having already erupted into 2019 with ‘Turned Loose’ their debut tour of the UK/Europe, including dates at Groezrock and The Great Escape along with their recent signing to X-Ray Touring, Horror My Friend are set to continue this trajectory with the release of ‘Dopamine Waster’. In a quick (almost) three-minute burst, Gordon touches on mental illness and anxiety, “I suppose it’s about how quickly, the right person can open you up, but how quickly you can close yourself down too – I’ve never thought about vocals and lyrics too much haha, but Josh and I have been trying to put more thought into it – this is a product of that new process”.