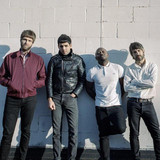 Welcome to The Heavy, Britain’s most incendiary party-starters and reliably impossible to pigeonhole funksoulhiphoprandbrockdance gang. Five albums and over a decade into their career, most bands start to ease down. The Heavy instead made “SONS” in 2019, as uplifting and urgent an album as you were likely to hear all year. The Heavy are notoriously known as the music industry’s worst kept secret. Their infectious brand of rock-soul infused hip-hop combined with the intense raw power from their live shows have led to a host of high profile features through the years. More likely than not, you’ve probably heard their gargantuan riff and boom-bap drum filled anthems while they conjured up a triumph-in-adversity sentiment that struck a chord across the globe. Whether it was their breakthrough single “How You Like Me Now?” or what became the iconic Guinness anthem "What Makes A Good Man”, The Heavy have been in your life probably more than you realise.