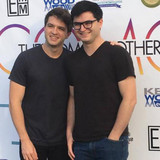 Matt and Andrew Como are two brothers, singer/songwriters from Long Island, NY. They love writing songs, playing guitar, bass and producing their own music.   They have performed at venues across the East Coast USA including the Hard Rock Café, Webster Hall, the Cutting Room, and Warped Tour at Nassau Coliseum. Their music has appeared on many TV shows including E! Network's Keeping Up with the Kardashians, MTV's The Real World, and The Oxygen Channel's Best Ink, and on global in-store playlists for H&M, Zara, Pull Bear among others. Their videos have been playlisted in US stores like Walmart, Costco, and BJs. They have performed and recorded with drummers Steve Jordan & Aaron Sterling, bassist Sean Hurley, and keyboardist Andy Burton.