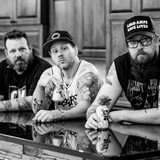 Marijuana Johnson plays stoner rock with a deep emphasis on grooving riffs and good times. While the band has gone through various line-up changes over the years, the current three-piece lineup of Ashley Ashbrook (guitar/vocals), Elliott Harrell (drums), and Matt Clark (bass) finds the band at its heaviest and most musically diverse point. After the release of 2010's full-length Green Hit and a handful of EPs—including the 2020 compilation of older material, B.Hawkwind—the Dayton, Ohio-based trio are set to unleash a new album of crushing tone and stoner abandon: Gem City Kush. Gem City Kush is in part a love letter to their hometown (known as the Gem City). The album's first track, “This Smoke” makes quick work of adding a layer of funk-fueled grooves atop lyrics which push to shine a light on the inclusive nature of cannabis culture and the resilience of Dayton. But Gem City Kush doesn't hold back on bringing the thunder, either. Tracks like the over-the-ZZ-Top “Kush” and the doomy, weed-fantasy album closer “Smoke Signals” present a band who are just getting started on something new.