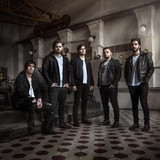 Countless Goodbyes is a metal band with rock elements from Pori, Finland. Countless goodbyes is known for their energetic live shows and their ability to combine surprising melodies and styles of different genres such as metalcore and rock, still keeping their unique style in metal scene. Since their first single releases in 2011 the band has gained ground in the Finnish metal scene. In the year 2014 the band spread their name even more when they opened for a world-wide known metalcore giant Asking Alexandria at a sold out The Circus -club in Helsinki. In 2017 their strong success continued when they opened for the mega-name of metalcore, August Burns Red at Tavastia Club, Helsinki. In addition, the band has performed in big Finnish metal festivals. The band will release their long-awaited debut album April 19th 2019. The album will introduce a new style to the band’s music, since the band has added a lot of clean singing in to their songs to support the heavier screams. On the album, the band’s new singer, Onni Kivikaarre, among other topics is singing about the present course of the world toward potential man-made ruin which the cover art of Cycles refers to. Cycles will bring something new to the lovers of metal music by introducing compelling melodies, heavy riffs and punchy hooks. After the album release, Countless Goodbyes is ready to hit the road and introduce their brand new material to the world with pride!