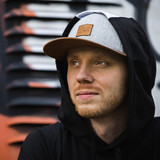 Emanuel started to sing when he could barely walk and has never stoped since. He made it to the finals in 'Swedens got Talent 2017' and his career has been going up ever since.   Emanuel has sung behind Sir Elton John and Tom Jones to name a few artists and now he is creating his on platform as an artist.  He studied Musical Theatre but he felt that he wanted to be more personal with his audience so now he is writing new songs and touring around Sweden (for now) and keeps putting his soul into his music.   Read more on emanuelbagge.com