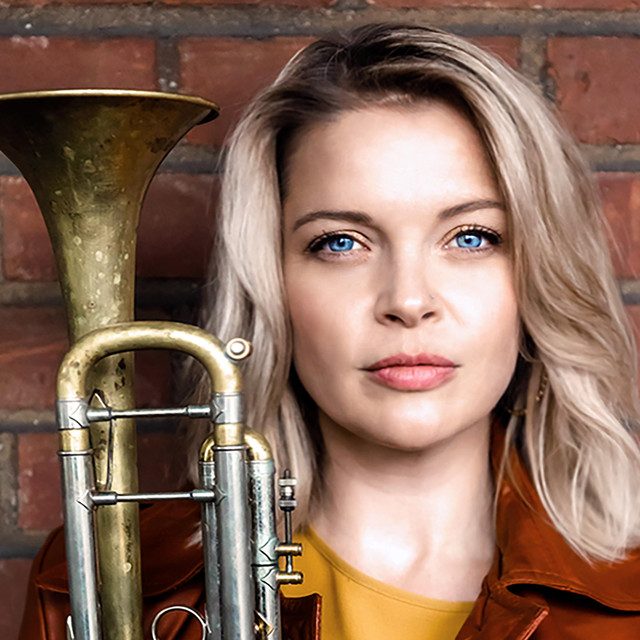 Canadian trumpeter and vocalist Bria Skonberg is a charismatic performer with a sound steeped in traditional New Orleans jazz, swing, and bossa nova influences. Since emerging in New York in the 2010's, Skonberg has won praise for buoyant albums including 2014's Into Your Own, 2015's Juno Award-winning Bria, and 2017's With a Twist. A native of Chilliwack, British Columbia, Skonberg took piano lessons growing up and first began playing trumpet in her teens upon her father's advice. Interested in jazz, she joined her school band program which, at the time, also featured a small traditional jazz group. Early on, Skonberg soaked up recordings by Louis Armstrong, Nicholas Payton, Duke Ellington, Kenny Ball, Jim Cullum, and others. She also gained valuable experience working with Australian-born hot jazz trumpeter Simon Stribling, who mentored her. After high school, Skonberg earned her undergraduate degree in music from Vancouver's Capilano University. In 2010, she relocated to New York City where she further honed her skills studying privately with noted traditional jazz trumpeter Warren Vaché. An in-demand performer, Skonberg has performed with a wide-array of performers including Wycliffe Gordon, Bucky Pizzarelli, Howard Alden, Jon-Erik Kellso, Emily Asher, and others. As a solo artist, she debuted with 2009's Fresh, followed by So Is the Day in 2012 and Into Your Own in 2014. A year later, she signed with Sony Masterworks/Okeh Records and delivered Bria, which ultimately took home the Juno Award for Best Vocal Jazz Album. In 2017, Skonberg returned with the Matt Pierson-produced With a Twist, which found her further expanding her sound and drawing upon various lounge and bossa nova influences. The more spare and dusky small group session, Nothing Never Happens, arrived in 2019. ~ Matt Collar, Rovi