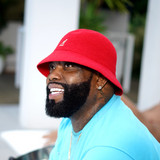 Demarco is a dancehall star, producer, video director and all-around Jamaican music legend. His signature singles “Fallen Soldiers” and “I Love My Life” are indelibly woven into the fabric of modern Jamaica, while songs like “No Wahala” (featuring Akon and Runtown) have put him at the forefront of the burgeoning fusion between reggae and afrobeats. Behind the scenes, he’s produced some of modern dancehall’s definitive riddims as well as crossover smashes like Charly Black’s “Gyal You A Party Animal,” and written songs for artists ranging from Bounty Killer to Rihanna. More than a decade deep into a career that’s taken him from Jamaica to the States and back again, Demarco is finally set to release his debut album, Melody, October 22 via Oakland’s Ineffable Records.