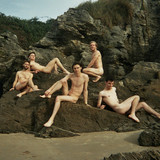 photo by Noor Vandendriessche Shht (Ghent, Belgium) are Space Rock for the now generation. Seeking to expose a sublime truth in all things kitsch and quirky, the combined force of what constitutes Shht results in an enticingly wet post-pop dream. A modern digital bricolage of ideas delivered by a band with chemical minds and a singer hanging from the roof mentally and physically. Shht are deconstructing deconstruction. Shht embodies the rich cultural heritage that Ghent has to offer for those who care to look. From the quirky, energetic experimental jazz funk of BeraadGeslagen to the hard hitting beats of the Deewee trademark to the raw rage of Raketkanon, Shht soaks up the musical multitude of what lives and breathes in their city and combines it with their love for established masters such as Frank Zappa, Kanye West, Mr. Oizo, The Beatles, Mauro Pawlowski, Mathijs Steels, Johann Sebastian Bach, resulting in their very personal touch. Shht is known to strike audiences with inexhaustible energy. They have played over 200 shows, including Pukkelpop, Linkerwoofer, Leffingeleuren, Best Kept Secret Festival, Eurosonic Noorderslag, Oppikopi Festival, MENT Festival, G! Festival and Trans Musicales. They have toured in Spain and The Netherlands, and also accompanied De Staat as support band on their recent tour across Central Europe and Great Britain. In their home country, they have played shows in De Vooruit, Ancienne Belgique, Het Depot, De Kreun, and many more.