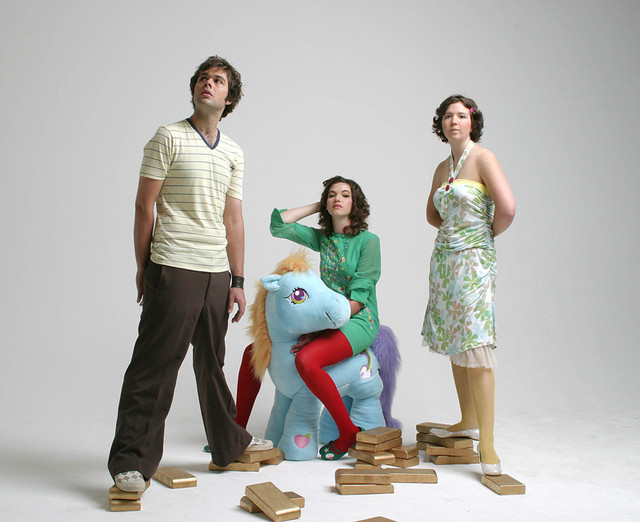 Karaoke -- an unhinged rendition of the Disney chestnut "A Whole New World," to be specific -- brought Australians Patience Hodgson, John Patterson, and Alana Skyring together as musicians, but that sap-soaked turn at the mike didn't exactly foreshadow the classic punk racket on which the trio would build its reputation. Friends since childhood in Brisbane, Hodgson, Patterson, and Skyring honed their lo-fi, hyper-spazzy sound in Patterson's garden shed in the early 2000s with the help of the guitarist's father, who provided ample beer and barbecue. In the space of two years, the trio was releasing limited-run singles and demos of its Ramones and Yeah Yeah Yeahs-influenced songs -- enough to build a back catalog bigger than many established bands. In 2004, Dew Process, the label that is also home to Sarah Blasko and the Tremors, came calling; by February of 2005, the band had released its debut EP, The Ouch. The Touch. Later that year, the Grates played Austin's South by Southwest festival, initiating legions of stateside fans. As of winter 2005, the heavily touring act was in a Chicago studio recording its debut full-length alongside producer Brian Deck, who has worked with Modest Mouse and Iron & Wine. That album, Gravity Won't Get You High, arrived in late summer 2006 as a joint release by Dew Process and Interscope. A second album, Teeth Lost, Hearts Won, followed in 2008. ~ Tammy La Gorce, Rovi