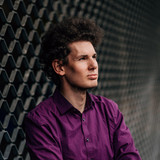 From time to time there are those people who manage to touch you with nothing more than the sound of their plain instrument. Playing the piano all on his own Thomas Krüger mesmerizes and fascinates his audience. But as so often in life it was not just his talent which made him breakthrough. It happened through an educational journey in Paris two years ago where he spotted a piano at the airport Paris Orly. He instantly started playing a medley of popular pop songs which just came into his mind while his mother was filming him with her mobile. Together they uploaded the video on YouTube and created his own channel ‚Mr. Pianoman’. Over night the video reached a massive spread through social media and since then gained 30 mio views already. From this point on Thomas Krüger was sure about his passion and enriched the world of music with numerous spectacular piano flashmob videos on YouTube.

By now he counts over 380.000 subscribers on his channel. 2019 now is all about his own music. For the first time he will publish his very own musical works. Recorded a whole session at the ‚The Famous Goldwatch’ studio in Berlin already, the first song to be released is called „First Light“. A track fully in the vein of