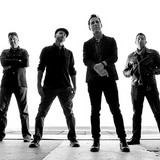 “Oh I remember rock and roll/The way it seeped into our bones/I’m still here and you’re still gone.” The words sung by THE RATCHETS frontman Jed Engine on their single “Gotta Be Cool” are the perfect way to epitomize this band. Refusing to pigeonhole itself, this NJ rock ’n roll band is picking up right where it left off with its new record First Light after laying dormant for years. While other bands of their caliber zoomed onto the rock and roll highway only to quickly run out of gas, The Ratchets stayed on the side streets and meandered around on local roads guarding their credibility like it was the crown jewels. Turns out, at least in The Ratchets’ case, brevity is the soul of wit. Guitars in tow and their new record First Light in hand they’ve continued pushing their musical boundaries to deliver on their unique brand of punk that fans have come to know and love. A decade and a half after their formation, The Ratchets are back to deliver another record which exemplifies why they were so beloved from the start – the ability to pay homage to their influences with a modern flair and a heavy dosage of authenticity.