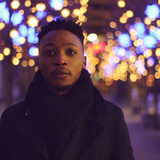 Nigerian-born, German-based singer/songwriter Victor Skyes, started out singing in the church choir at the age of 11. His father had encouraged him to play the piano at the age of 8 and hired a piano teacher who would later quit. At age 13, he taught himself to play piano and began writing songs. His music garnered substantial attention while attending Caritas University, where he obtained a Bachelor's degree and was appointed the University's music director until 2011. He draws most of his inspiration from gospel music and directed several choirs before deciding to focus on his career as a solo artist.   Victor has often been commended for his songwriting and has written songs for other artists. Following his relocation to Berlin, he released his self-produced EP "Keep The Light On" in September 2017. The definitive record incorporates elements of pop, soul, gospel and house music with the lead singles "Hey Baby" and "Borderline".   The first single "Mad Men" from his upcoming album was released on Jan 9, 2020. It has received lots of positive feedbacks, with many describing it as a thoughtful energetic record with a memorable bass guitar and a catchy tune to make you hit the replay button. His new single “Pilot” was released on May 1st, in tribute to a family friend he lost. His debut album is set for release this year and Victor has a lot to say that needs to be heard.