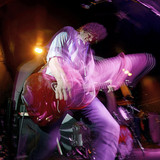 The scene: Seattle, Washington. A town known for its rainy days, the grunge explosion, and the Microsoft Corporation was also the home town of three recovering metalheads who just wanted to form a band that didn't resemble Soundgarden or Queensrÿche. Having a common interest in the Fastbacks and Hüsker Dü, along with an extended background playing in "horrific cover bands," Ean "Sicko" Hernandez (guitar/ vocals), Denny "Sicko" Bartlett (bass/guitar/vocals), and Josh "Sicko" Rubins (drums) got together in 1991 to form Sicko. Not shying away from their geek-core credibility, Sicko maintained their trademark sound of hyperactive pop-punk without an ounce of taking themselves too seriously. Among all the Pearl Jam and Nirvana wannabes that flooded their city in 1992, a small fan base welcomed them as a relief, as something different, along with their debut four-song EP on Empty Records. Followed by a split 7" with the Mr. T Experience, their first album single, "Can You Feel the Love in This Room," was released in early 1994. Accompanied by their happy-go-lucky sound and Indigo Girls cover of "Closer to Fine," Sicko mounted an unsuccessful tour of the United States, and a drummer change would soon follow. In 1995, Johnny Ray Young briefly filled in on the skins while they recorded Laugh While You Can Monkey Boy. Not too long after those sessions, Rubins rejoined the group, Chef Boy R U Dum was also recorded, and both of these albums were released that same year. Unfortunately, after the release and supporting tour of 1997's You're Not the Boss of Me, Sicko announced their separation in July of 1998. The following year, frontman Ean Sicko moved on to form his own project, Tales from the Birdbath. Accompanied by members of the Primitive 5, they released their first album on Empty in 1999. ~ Mike DaRonco, Rovi