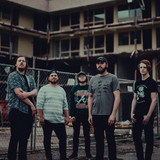 At the start of 2015, Never I began performing around the Southeastern United States, fusing their unique sound with a show ignited by their energy. Show-goers describe the band as chaotic and raw with fast-paced riffs, driving percussion, and intense vocals throughout their performance. The Charlotte-based outfit first released their debut EP, SPEAK (2016), followed by two singles; “Hopelessness In Hoping For The Best” (2017) and “Shatter” (2018). Shortly after, the band then released their sophomore EP, The Less I Loved Myself (Mar. 2018), produced by Matt McClellan. ​2016-2018 consisted of multiple tours across over 23 states, a performance at Van's Warped Tour 2017 in Charlotte, NC as finalists of Ernie Ball's Battle of the Bands, a performance on The Summer Slaughter Tour 2018 in Raleigh, NC as winners of the Headbang For The Highway Battle For Summer Slaughter, and many other local and regional performances. Briefly following the recording of The Less I Loved Myself in the spring of 2017, vocalist Ian Powell parted ways with the group. Powell’s shoes being filled by Jacob Peters, the band developed a completely new energy.

With this new energy came the early 2019 release of single "Finding Hope Within A Broken Home," which touts a slightly more aggressive yet equally emotional approach to sound they have come to be known for. ​Never I is currently comprised of Jacob Peters (Vocals), Connor Vogt (Guitar/Vocals), Dakota Boelte (Bass), and Clint Hughes (Drums).