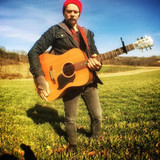 For Chris Rattie & The New Rebels, 3 is the magic number. The band is a roosty, and dynamic three piece, whose sound ranges from raw, elemental rock n roll to harmony driven acoustic ballads. The New Rebel’s sound is simultaneously anthemic, cathartic, and intimate. Chris Rattie’s crafted tales of lovers, losers, and dreamers wrap themselves around hard driving rhythm, greasy electric guitar, and gritty harmonica, forming a rough and tumble fusion of rock, blues, country, and folk. Chris Rattie & The New Rebels were formed in State College, Pennsylvania in 2017 after Chris released his second album, Porch. With their drummer parting ways with the band in late 2018, The New Rebels got inventive. Chris, Jeff, and Nate

redefine the phrase “power trio”. All of them multi-instrumentalists, The New Rebels are a lean, mean machine, creating an engaging live performance that moves from a whisper to a roar. Excited by their rediscovered sound, they booked time at The Church recording studio in Pittsburgh, PA in June 2019. The result being three brand new singles: “Culture War Casualty”, “Storm Song”, and “Chaos and Stardust”. Self produced, with engineer Dave Hidek pushing the faders, these songs represent The New Rebels simultaneously raw and polished, unique new sound. Armed with new music and renewed energy Chris Rattie & The New Rebels are back at it again, a working class band in a rusty old van, keeping that dream alive for all of you fellow sinners out there.