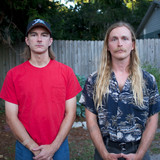 Tonstartssbandht (pronounced "tahn-starts-bandit") are a sibling noise rock duo founded in 2007 by Florida-raised, Brooklyn/Montreal-based brothers Edwin and Andy White. Employing a genre-hopping aural mish-mash of loop-driven pop, doomy, experimental blues, and nervy, fractured indie rock, the pair spent their teenage years exploring the permeable boundaries of improvisational noise rock in their hometown of Orlando. In 2009, after striking out on their own, they self-released a trio of albums -- An When, Dick Nights, and Maihama -- and soon became fixtures in the Montreal D.I.Y. experimental music scene. The following year saw Tonstartssbandht release their music through Arbutus Records, issuing their debut EP for the label, Now I Am Become, in 2012. In 2014 the band released Overseas, a double-live LP that featured 80 minutes of music culled from over 25 hours of material recorded during their 2013 European tour. In 2017 the duo made the move to Mexican Summer and released Sorcerer, their first official full-length outing. ~ James Christopher Monger, Rovi