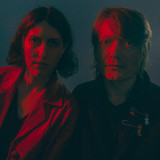 Join Rose & Nick for a Tim's Twitter Listening Party for debut album "The Last Mirage" on Tuesday 1st June at 9pm (BST). Be sure to follow Lean Logic at twitter.com/leanlogicband Lean Logic release their new single Living Beings Pt.2 ( Metronomy Remix) on 30th April 2021, on O Genesis . The project is a collaboration between Nick Carlisle ( Peepholes / BAMBOO / Katy And Nick) and Rose Keeler-Schäffeler ( Keel Her ) which began late 2019 with Rose offering to remix a Bamboo track, and ended with a completely new project and an album of original songs written with Nick, and recorded during lockdown.   The duo takes its “Lean Logic” name from cultural historian and environmentalist David Fleming’s handbook for the future, which also informs many of the lyrical themes on the forthcoming album “The Last Mirage”, released 28th May 2021.