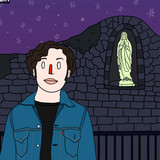 Playing guitar and writing songs since the age of fifteen, well worn through years in rock and roll bands - Caoilian Sherlock's solo material takes a considered, yet facetious ramble through the deepest of existential crisis. During live performances he is backed with an electric guitar, a degree of casual sombreness, a joyous approach to playing music and an overly sentimental view of almost everything and with his band The Big Children. Caoilian Sherlock released his debut EP 'The Faraway' under the moniker Saint Caoilian in 2017, on the back of a year of prestigious support shows with Roy Harper, Ryley Walker, Sean O'Hagan, and a tour around Ireland with Joan Shelley and Nathan Salsburg. Coinciding with this tour were shows at Body & Soul, Another Love Story, Sounds From A Safe Harbour, Quiet Lights and It Takes A Village Festivals. "His first solo single allows that raspy sweetness to dominate a song of bright laid-back blues folk" - Irish Times (Single Of The Week) "‘Shades Of You’ is an instantly infectious romantic ditty that wobbles and builds through simple lyricism and tender instrumentation. Sherlock is one of Cork’s strongest songwriters right now and ‘Shades Of You’ is a wonderfully charismatic pop song."