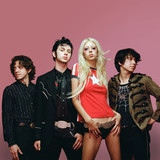 Starcrawler are a rock band for a new generation. Best known for their explosive live shows, lead singer Arrow de Wilde commands the stage with electrifying energy and charisma. Henri Cash plays the perfect foil to Arrow with an undeniable style and performance of his own, tearing at the guitar with a massive sound like few have before him. Since their early days, Starcrawler have won the love of such legendary artists as Shirley Manson, Elton John, Iggy Pop and Dave Grohl, recently starring in Grohl’s documentary “What Drives Us”.

They’ve opened for the likes of Beck, Spoon, The Distillers, MC5 and Foo Fighters and toured across the UK, EU, Australia and Japan playing festivals such as Reading, Leeds and Fuji Rock.