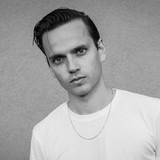 MP The Kid managed to profoundly establish his name in the Austrian music scene and is continuously attracting new fans internationally. He reached #2 in the Radio FM4 charts twice. Radio FM4, the biggest Austrian youth radio station, also chose MP The Kid as their "Soundpark Act of the Month" right after his first release. This is an honor that few newcomers claim for themselves. These achievements were followed by gigs at renowned festivals like Novarock Festival, FM4 Frequency Festival, Poolbar Festival, and as opening act for the Grammy Award winning Duo Twenty One Pilots His look is inspired by icons of the 50s and his music by the likes of Drake or Post Malone. What started as a childhood hobby ended up as production work for national and international artists, which was followed by MP experimenting in producing tracks for himself. His unique mixture of rap and pop music led to overwhelmingly positive feedback on his first own songs which he released on Soundcloud. To this day MP The Kid still is 100% responsible for the writing, production, mixing and mastering of all his songs. He already reached remarkable numbers on Spotify (more than 2.000.000 Streams) and collaborated with artists like Mavi Phoenix and Leyya.