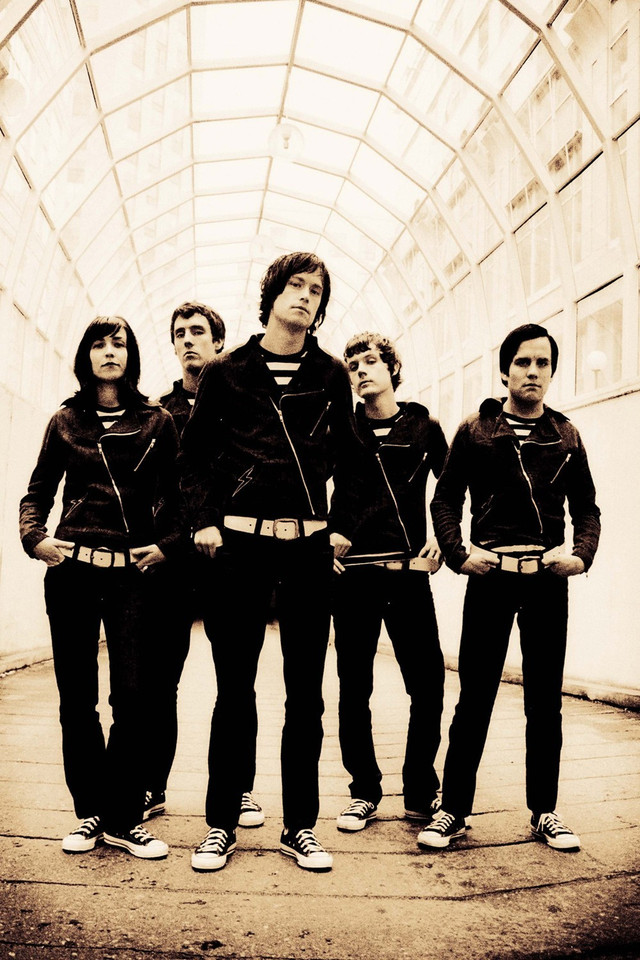 With roots in five different bands, the (International) Noise Conspiracy formed during the latter half of 1998 in Umeå, Sweden. The quintet set out to use its music as an attack against capitalist culture at large by taking the universal idea of popular culture and molding the basis of its phenomenon into statements of resistance. As for the music, the band created a hybrid of garage rock and 1960s soul mixed with the punk of the late 1970s. Since its formation, the (International) Noise Conspiracy has released a handful of 7" records and full-length albums, several of which were recorded with veteran producer Rick Rubin. Fascinated by singer/songwriter Phil Ochs' assertion that "the perfect rock outfit would be a combination of Elvis and Che Guevara," guitarist/vocalist Lars Strömberg and lead vocalist Dennis Lyxzén decided to start a group in the fall of 1998 that would make a reality of that statement. Lyxzén had just witnessed the implosion of his former hardcore band, Refused, and was hungry to start anew with a group that could use its music as a political vehicle. Strömberg, who was performing with the Umeå punk band Separation, shared Lyxzén's ideals, and the duo set out to hunt down more members to join the project. They found a bassist in their friend Inge Johansson (of the Umeå-based art/noise band the Female Anchor of Sade), and the (International) Noise Conspiracy properly took shape upon the dual addition of guitarist/organist Sara Almgren and drummer Ludwig Dahlberg, both of whom were performing with the political rock band Saidwas. (Prior to Saidwas, Almgren had made a name for herself playing guitar with the Umeå metal outfit Doughnuts.) With their lineup in place, the (International) Noise Conspiracy stepped into the studio in 1999 to record 12 songs. The tracks were released as a series of five 7" records later that year on four different labels, including the band's own The Black Mask Collective, as well as Premonition, Car Crash, and Trans Solar Records. The majority of the tracks that comprised these 7"s were then presented on the band's first full-length LP, The First Conspiracy, released later that same year on the G-7 Welcoming Committee imprint. The band members also kept busy with side projects; specifically, Lyxzén released a full-length album, titled Songs in the Key of Resistance and a self-titled 7" record with his band the Lost Patrol. The style and message of the latter group remained in much the same vein as that of the (International) Noise Conspiracy. Johansson also kept his hands full with his other band the Female Anchor of Sade, which released the 10" "Tanks to Everyone." The (International) Noise Conspiracy returned in May 2000 to release their second full-length album, Survival Sickness, on Burning Heart Records. The band also brokered a deal with the CA-based punk label Epitaph Records to distribute the album in the United States. First Conspiracy appeared in early 2001 and was met with a mixed reaction due to its heavy political content. Later that year, the Capitalism Stole My Virginity EP saw a more amicable reception due to the growing interest in the Scandanavian rock scene from American garage rock fans. In the spring of 2003, the band released Bigger Cages, Longer Chains, an EP that included several videos and was significantly short on political messages. Sara Almgren left the lineup soon after, but good luck loomed around the corner as legendary producer Rick Rubin signed the group to his own label, American Recordings. The soulful, Rubin-produced Armed Love appeared in Europe in 2004, while its American release followed nearly a year later. Released in 2008, The Cross of My Calling saw the group reprising their relationship with Rubin. ~ Stephen Howell, Rovi