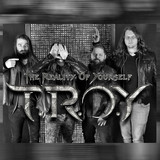 The Reality of Yourself

Featuring The Reality of Yourself

Breathing new life back into the soul of rock- TROY is a true American rock band with reverence for the greats and their dedication to the cause. Currently in their prime, this Missouri rock outfit embodies a powerful force that transcends through the subconscious level via their energetic writing style and gripping live shows. Coining the term “Battle Rock”- TROY’s powerful modern twist with vintage flavor is nothing less than a reinvention of rock. TROY- a moniker for “The Reality Of Yourself” is inspired by the bands musical perception, and the notion that thought truly manifests reality. A sound that unmistakably embraces the attitude and poise of legendary bands such as- Aerosmith, the Allman Brothers and Metallica. The bands buzz caught the attention of multi-platinum producer- Jay Baumgardner, who saw an opportunity to work with a promising and exciting new rock act, something drummer Erik says, “Was an exciting and memorable experience”. Built for the pavement- these proven road warriors have incredible show experience along some of the top names in rock n roll, a few including- Skillet, KORN, Breaking Benjamin, Papa Roach, and Nothing More. TROY has even tapped into the festival circuit with 3 separate appearances at Rocklahoma in the last 4 years, Loud-N-Lima in 2017 and Rockstar Energy’s Uproar tour in 2015. New music, videos, fan-driven interactive streams & live show dates coming this year.