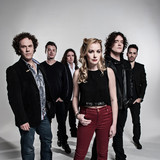 The title for Anathema’s eleventh full-length would also serve well in describing the Liverpool sextet’s uncompromising dedication to fearless artistry since forming in 1990. They’ve continually evolved by placing hope in the future – from leaving the underground scene they were fundamental in establishing to continually mesmerising the world with stargazing post-progressive alternative rock that knows no borders. Led by brothers Vincent and Daniel Cavanagh, along with drummer John Douglas, singer Lee Douglas, bassist Jamie Cavanagh and keyboardist/drummer Daniel Cardoso – this is a band that has forsaken all notion of expectation – highly evocative music simply pours out of them. Despite early records being hailed as classics, the band left their heavier roots and transcended into a more emotional heaviness that resonated deep within the heart of the listener. Alternative 4 (1998), Judgement (Remastered) (1999), A Fine Day to Exit (Remastered) (2001) and A Natural Disaster (Remastered) (2003) marked an era of bold experimentation for the band – taking the notion of self-exploration to its furthest limits – before 2010’s We're Here Because We're Here truly cemented their stature as world-beating post-progressive kings. After 2012’s award-winning Weather Systems and 2014’s spellbinding Distant Satellites, the ambient rockers are back with their eleventh full-length, The Optimist.