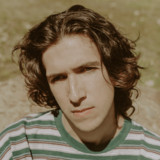 Ricky Montgomery started his music career in the suburban basements of West St. Louis County after dropping out of the Eureka High school band at age 14, where he played clarinet. Struggling for years to find a collective that stuck, Montgomery shuffled through local bands in the Midwest Emo underground until finally releasing music under his own name on his debut, Caught on the Moon EP in 2014. Released immediately after scrapping together an audience off of the now-defunct Vine app, the EP charted at #20 on iTunes' Rock and Alternative charts. After dropping out of the University of Missouri - Columbia, briefly interning at Adult Swim's failed New York office, and eventually moving back to his hometown of Los Angeles, Montgomery released his debut LP, Montgomery Ricky to similarly positive reception in April 2016. After moving to Los Angeles, Ricky founded The Honeysticks with childhood friend Ben Russin and fellow viner Caleb Hurst. After releasing two singles, (Out Like a Light, I Don't Love You Anymore), an EP (The Honeysticks), and a remake of their debut single (Out Like a Light 2), Montgomery quit music for a year to focus on other professional interests before eventually coming back into music in the summer of 2019. In summer 2020, Montgomery Ricky resurfaced in popularity after two of its tracks, Mr Loverman and Line Without a Hook, both went viral on TikTok. Right away, Montgomery signed to Warner Records and will be releasing new solo music throughout 2021.