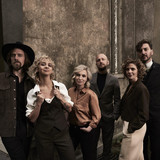 Formed in 1997 in Tilburg, the Netherlands, while the original members were still in school, Krezip played a number of festivals to build a reputation, but remained unsigned until 2000. In the meantime,

the band - led by pianist and vocalist Jacqueline Govaert- independently released an album of demo material, Run Around, in 1999. Warner came calling a year later, and the band was signed to the major-label giant, who then released their second official single, "I Would Stay," which became a number one hit in Belgium and stalled at number two in the Dutch charts. An album followed shortly thereafter (Nothing Less), and the band finished out the year with two more hit singles. Two more albums followed, 2002's Days Like This and What Are You Waiting For in 2005.