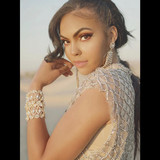 Chicago native Kiara Lanier is a vocal performance artist, songwriter and actress. Kiara Lanier’s music is a sensual yet ethereal blend of R&B, Future Soul, and World music. She exudes the cosmic essence of a modern Chaka Kahn, Sade, and Lauryn Hill. Since 2016, Kiara has began questioning how can music help heal people. The response was -The QiQi, a contemporary dining experience encouraging healthy lifestyles through an immersive contemporary art performances, a musical concert and holistic health education. Her upcoming tour will incorporate holistic health resources given to each community she performs in around the world. Kiara’s voice has been featured on television shows to include American Idol, David Bowie’s Station to Station Film, The Tonight Show, Empire and The Chi. She also sync licenses her music on numerous tv networks including Showtime and has written her own book to teach musicians how to have her same success. Kiara is no stranger to large stages; having performance credits to include Presidential parties, Lollapallooza, and various festivals across the US and Europe. Be it her exotic afrofuturistic style that’s gotten her praises from Marie Claire and Essence or her playful and political videos given props by Okay Player- Kiara is an all around inspiring and fun artist that’s bringing her own true essence of Love back to contemporary music. Kiara is currently based in Los Angeles, CA.