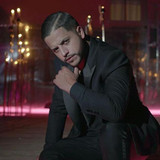 Mendoza is a charting singer and songwriter of Mexican regional music. He is part of a millennial generation that has brought new sounds and arrangements to norteño music. Mendoza was born in Michoacán, Mexico, but was brought to the United States by his parents at age two. He was raised in San Clemente in Orange County, California. Music was his pervading interest from childhood on. His musical idols were Valentín Elizalde and Adan Sanchez. At 16, he scored his first gig. He borrowed $200 from his mother in order to cut a demo. Recorded in the home studio of a friend, it comprised traditional songs. He burned enough CD-Rs to sell at the merchandise table of the show. He went over so well that he recouped what he had borrowed, paid back his mother, earned an extra $200 to put into more product. Mendoza