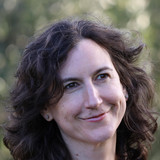 Heidi Wyder taught herself to play guitar from a chords book whilst at university, inspired by the simple chord progressions of various 60’s and 70’s Pop Hits. A few years later, she started song writing during a time of personal crisis. 🎵 Living in a boarding house as a newly-qualified French and German teacher, her pupils were the first to rave about the catchy tunes. Working with producer John Hamilton at EQ Studios, London, her debut album ‘Peeling Oranges’ released in 1993 to critical acclaim, and a second album ‘Solitaire’ followed in hot pursuit in 1994. 🧘‍♀‍ Song writing was the catalyst that took her on an unexpectedly life-changing trip to India; a powerful spiritual journey which in turn inspired her book:" Kriya Yoga, Four Spiritual Masters and a Beginner" (www.kriyasource.com / IG: “kriyayogabook”) 🎵 After the book was first published in 2003, Heidi found herself writing and recording once more, this time inspired by yoga and meditation. The best of her devotional & inspirational songs are planned for future release. 🧘‍♀‍ Connect with Heidi on IG (@heidiwyder) & FB for the stories behind these "Soul inspired Songs" & embark on your own journey towards more creativity, mindfulness & meditation! 🎵 “Wyder’s poetic lyrics have a positive, uplifting message, touching our very core and inspiring us to reach out to find a higher purpose.” – L. Hopkins