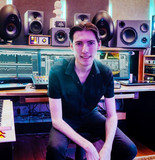 Rob Swan, aka DJ Rob Tech and 28 Ohmz, is a Sydney based Trance, Chill and Drum and Bass DJ/Producer. It was at the age of 3 that Rob was first introduced to electronic music with Movin' Melodies by ATB. At the age of 8 with Cubase SX3 and Acid 3, Rob started to learn how to create this type of music. Rob's influences include many music producers and composers, but most notably Deadmau5, Sunlounger, Keeno, Aly & Fila and Filo & Peri. The track "Total Combustion" from the album "October Chill Vol 1: Water" has been on the SBS Chill playlist since 2015. It was voted number 16 on the 2016 Chillest 100 chart and number 31 on the