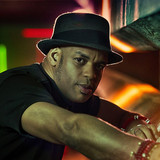 Roberto Fonseca is a Cuban pianist, vocalist, multi-instrumentalist, composer, producer and bandleader. Havana-born and based, he has released nine solo albums, collaborated across genres, been nominated for a Grammy Award and toured the world several times over. Along the way he has achieved the aim with which he began his professional career in the early 1990s: “Wherever people are, I want them to hear my music and say, ‘This is Roberto Fonseca’.” Born in Havana in 1975, the son of a drummer father and dancer/singer mother, Fonseca started playing drums aged four and the piano aged eight. His tastes were always eclectic: hard rock. American jazz. Funk and soul. Music made in Africa and Brazil. Classical music. Reggaeton, electronica, hip-hop. The music of Cuba: Fonseca’s deep AfroCuban roots underpin a sound that builds bridges between the ancient and modern and takes Cuban music – all music – forward. His new releas Yesun features guests including Grammy-winning saxophonist Joe Lovano, lauded French-Lebanese trumpeter Ibrahim Maalouf and rising star Cuban rapper Danay Suarez alongside retro-modern keyboards, electronic beats and AfroCuban rhythms. Having long proved himself exceptional (in June 2019 he was awarded the distinguished Ordre des Arts Letters from the French Ministry of Culture), Roberto Fonseca is making the music he has always wanted to make.