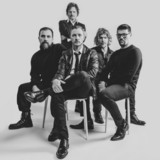 IZA GRAU is a darkwave / post-punk band born in Modena in 2016. Influences and each member origins from other musical projects immediately made the reworking and transformation of the ‘80s and 90’s great musical currents become the preferred language. Gothic atmospheres, musical articulations, rock attitude and the elegant rhythmic nuances blend together to regenerate in a charismatic, incisive and, above all, contemporary darkwave / post-punk sound. The first results lead to "Days Are Nothing”, a 4 songs EP that immediately obtains excellent acclaim and suggests good intentions for a future album: the year is 2017. After the live dimension of the band has reached optimal cohesion the composition of the songs leads to the birth of a new album containing 9 songs. The band records at Peak Sound studio by Simon Maccari and the tracks are mastered by Giovanni Versari (Muse, Verdena, Capossela…). "Vastness Hurts" is born. With great satisfaction of the band the album is immediately noticed by Cleopatra Records, cult independent label from Los Angeles, with which Iza Grau signs a contract. "Vastness Hurts" is released on April 3, 2020.