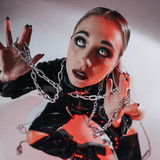 Sydney Singer/Songwriter and recording artist Sammi Constantine is an "edgy pop force who is making her own waves, in the Aussie pop scene". Sammi Constantine, developed her love for music at a young age, initially as a ballet dancer. After a 6-week hospital stay in her teenage years, Constantine transition from the dance world, into songwriting and music, which she now uses as a powerful and influential way, to express herself and speak to her audience. With a passion to be heard and a reason to make a statement, Sammi Constantine is an artist to keep on your radar. Sammi has written with influential names in the industry including Tommy Brown Produce , Warryn Campbell, Evie Irie, Ash Grunwald, LARA D, Dylan Nash, CYRUS , Just A Gent, Woodes, Elk Road, The Kite String Tangle, Mashd N Kutcher, Glades, and many more. As well being more than comfortable on the stage, Sammi has performed at a number of festivals including Metro Theatre (Jacob Collier support). Most recently Sammi Constantine was handpicked by Rita Ora to open for her on her National Australian Tour to packed out rooms in Melbourne, Sydney, Brisbane and Perth on the tour.  Sammi Constantine is set to make a statement with her unique dark pop sound and intricate lyrics telling the stories of her self battles.