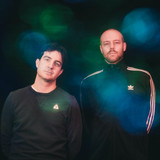 Visions in Clouds is a Swiss located producer duo consisting of two music enthusiasts committed to synth-driven, 80’s and 90’s influenced music. After several successful releases and constant touring throughout Europe for the past four years, they have made themselves a name amongst post-punk/wave fans from Lucerne to Lima. Releasing their poetic debut album ‘Masquerade’ in 2016, they have fine-tuned their style to deliver 'Levée en masse' (Manic Depression Records, 2017), and ‘What If There is No Way Out’ (IC Records, 2018). On 'Remixes' they collaborated with friends from the music scene, such as CRIMER and Pablo Nouvelle.