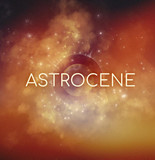 Astrocene is... Space, ethereal, things that bounce and move towards a warm blanket. Sounds of floating on a cloud in an alternate dimension. Ultimately, it bounces and weaves towards deviance, yet a soundscape fluidity. Or does it? Who knows? Maybe you? Do we? Hopes. When Steve and Josh were introduced at World Fest 2019 in Grass Valley California, right away they bonded over mutual gooofs and mutual affection for noise and poetic expression. Steve, a native of the Bay area, floated in the tech world and later roamed from Lake Tahoe to Costa Rica - farming, painting, and delving into songwriting. Josh, a raspy folkie for many years, performed with his Ohio roots-rock act Josh Eagle and The Harvest City. Moving to California in hopes of a new understanding of his art, he eased his complexities of what music should be and vowed to

“never forget fun”. He had for a while. The duo's first single, "Orbits" was released independently July 5th, 2020 and their debut album, ”EMERGENCE" is set for October-ish 2020 -going under the assumption that the world still turns. "Two mice fell into a bucket of cream," - Christopher Walken