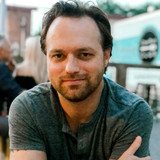 In a hyper-connected world that increasingly lacks true personal connection, Jon Webber speaks directly to the hearts of his audience, showcasing his candid songwriting through powerful and authentic vocal performance. Adventurous and loud, yet quiet and thoughtful, Webber is a singer-songwriter hailing from the Northern California coast. His style is honest and fun; his songs are reflections on the stories that define his life. This dreamer, romantic, and down-to-earth troubadour captivates audiences with his take-no-prisoners approach to entertainment. A consummate showman, Webber has toured all over the United States and beyond. He has performed with Maren Morris, Chris Stapleton, Billy Currington, Love and Theft, Leann Rimes, Lonestar, Frankie Ballard, LoCash and more. After his versatile debut album Done Up and Stripped Down (2012) and dark follow-up release Feel So Good

(2014), Jon Webber released his breakthrough album Stars Align (2016) in conjunction with his debut music video for the single "Tailgate." His most recent release, Standstill (2021) is a collection of self-produced recordings from his studio in Tennessee. Jon additionally writes for other artists across multiple genres.