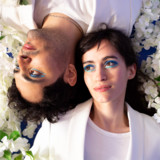 The London and Berlin based brother/sister duo (Francisco and Alicia) have been cooking up their blend of italo-disco, indie and synth pop since the project begun in the spring of 2020 as Corona first started to take a grip on the world. Having recently collaborated on a Christmas single with UK punk rock legend Eddie Argos from Art Brut and Berlin indie favourites Gurr, Minimal Schlager in a short space of time have earned respect from their peers and have had wave of offers for producing, remixing and collaborations. Influenced by dark/dreamy or even oneiric pop music, Minimal Schlager wouldn't feel out of place in a future David Lynch project.