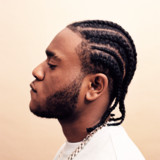 Hailing from West London, p-rallel has been immersed and surrounded by music from the start, honing his craft from his father, a multi-genre DJ. As part of the Elevation/Meditation collective alongside Louis culture, Lord Apex and Finn Foxell (who are dominating the underground London Scene) he started gaining notoriety as a DJ from a very young age, popping up at parties and having people ask who the kid on the decks was. It wasn't long before the young polymath earned himself his own monthly NTS show, becoming Jeshi and Lava La Rue’s touring DJ which led him to touring with slowthai. When he's not on the stage, parallel spends a lot of time in the studio working with the majority of the upcoming London Scene. From Rnb/Soul to Garage and Jungle... He's grown up on a wide library of music and now funnels it through his production and writing. His aim is to be the go to man for anything that requires soul and groove to it.